All images are copyright of GMS Photography LLC - © 2007-2013 GMS Photography LLC All rights reserved. Any redistribution or reproduction of part or all of the contents in any form is prohibited. You may not, except with express written permission from Gary M. Slawsky, or via purchase through this website, copy, distribute or exploit the content.You many not transmit images from this site or store them in any other website or other form of electronic retrieval system. Any questions regarding these images or requests for special usage not available through this site should be sent via the "contact" button at the top of this page.
Read More 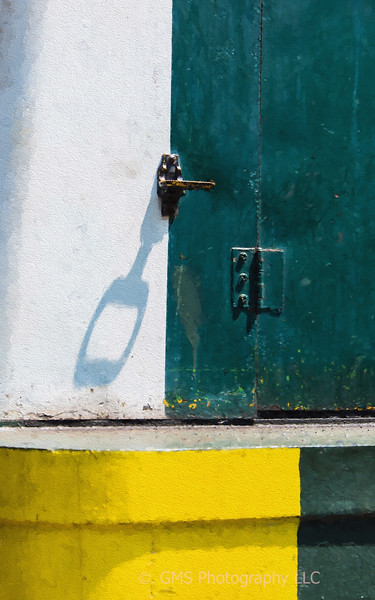 Juxtaposition Of Color Light And Shadow

An interesting non-alignment of of colors, light and shadow was found on the railroad engine of Pine Creek Railroad at Allaire State Park in Wall Township, New Jersey.
In 1950 a Company in New Jersey contemplated scrapping their steam engines in favor of diesel power. A small group of railroad enthusiasts bought the engines and started the Pine Creek Railroad No. 1. In 1952 the Pine Creek Railroad Museum was formed and a group volunteers added a passenger coach. In 1962 the railroad moved to Allaire State Park in Wall Township, New Jersey and the non-profit Pine Creek Railroad Division of of the New Jersey Museum of Transportation was created. Shortly thereafter a half-mile track was built. In 1967 an old railroad station from Aberdeen Township in New Jersey was relocated to the site and refurbished. Volunteers have provided many additions over the years that allow visitors to enjoy a ride through local railroad history that is still in operation today.